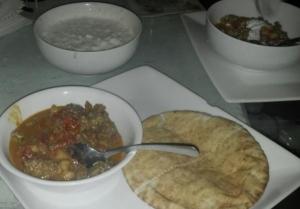 Lamb Chili with Chickpeas and Raita


To make the Raita: Peel the cucumber. Cut the cucumber in half lengthwise, and then cut each piece in half widthwise. Use a small spoon to scrape out the seeds. Grate the cucumber into a bowl. Tip the bowl over the sink, holding the cucumber in with your hand or with a plate, and drain out the excess cucumber water. Squeeze the lemon juice into the cucumber. Add the yogurt and mix everything together.

Add the mint, salt, cumin, and cayenne, and mix gently.

Cover the bowl and put it in the fridge. The raita should be served cold.

To make the Chili: Heat the corn oil in a large saucepot over medium-high heat. Use your hands to break the ground lamb into small pieces; then add the meat to the pot. Cook for about 2 to 3 minutes; use a wooden spoon to keep breaking the meat up, chopping it and stirring it constantly so that it browns evenly without clumping up. (You can also use Kofta meat here and leave out the onion and cinnamon later.)

Turn the heat down to medium. Add the red onion, ginger, garlic, garam masala, chili powder, salt, and pepper. Mix everything together so the meat is well coated in the spices and the oil, and then toast the mixture for a minute or so, until the spices release their flavor and aroma.

Add the coconut milk, tomatoes, broth, and bell pepper. Mix everything together, turn the heat up to medium-high, and bring the chili up to a simmer. Then let it cook, uncovered, at a low bubble, stirring occasionally to make sure it doesn’t stick.

When the chili has been cooking for an hour and a half, stir in the beans, and cook for another hour, until the chili has thickened and the flavors are rich and well combined.

Serve the chili with a spoonful of the cold raita on top.

This recipe is included in 3 recipe books.
Avg Rating: